During our time in Tanzania we visited several villages in the Zaramo area. It was in one of these villages that we met a sheikh’s daughter, whom we will here call “Rebecca”. She became a follower of Jesus some years ago, as did later her husband too. Here Rebecca shares about her conversion: 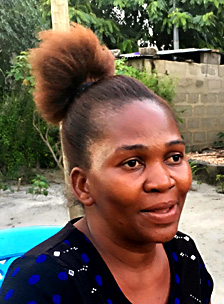 “Rebecca” is of the Zaramo tribe

– We lived nearby a small church. Out of curiosity, I observed through a window how they prayed there. One time while watching, I sensed a large darkness surrounding me and I got terrified. After a while, the darkness started to ease off.

– Then some church people came to visit my home and told me about their faith. My heart opened up and I asked Jesus into my life as my Lord.

– I began attending Bible studies and slowly began to understand God’s way of speaking to me.

– At that point our landlady, who was a witch, cursed me and I began to have nightmares. I was persecuted for my faith, as the news spread of me becoming a Jesus follower. We had to leave our house at a day’s notice. Thankfully, I had a Christian friend who taught me how to pray.

– Despite being destitute, a devoted Muslim gave us a house rent-free. What happened was that, after a while from moving in, the landlord visited and told us that ever since we came, he had been able to sleep like a baby through the night until the morning.

– Until then he had been tormented by the powers of evil, so that he could not sleep. The landlord inquired of us which witch do we visit that has such a power to affect him so favorably too? We told him our Lord is Jesus Christ.

– For this reason, the Muslim landlord decided to let us stay in his house for free. As we later were about to move elsewhere, he began to grieve for losing his protection. As we prayed with him, he also wanted to become a Christian.

– Now our former landlord is also a grateful follower of Jesus.