During the past three decades, the Bible school in Sumatra has sent out lots of pioneer evangelists – 500 of them – to Indonesian Kalimantan/Borneo. (The size of this huge island is even wider than Texas, USA). 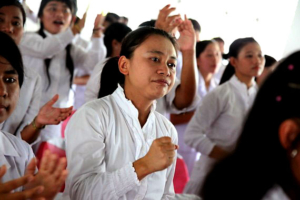 Pioneers at the school graduation

In 1997 five young people were sent to the jungles of central Kalimantan. As they crossed over a flooding, fast-flowing river hand in hand, one of them lost their grip and was never found again.

One of the survivors is Joyce. Later she looked for her intended tribe for hours in the unknown, roadless jungle. She finally heard voices of people, which led her to a village of displaced peoples in the Dayak area. The majority had been brought from the island of Java and were working in the nearby plantations. 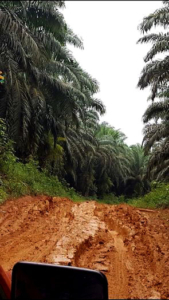 In her first year there, Joyce met daily with a poor family next door, giving them food, clothes, etc. This transmigrate family wondered why this Christian girl would help them, when even their “own people” didn’t. After a year, the parents returned to their home island while the children remained in the village.

These left-behind children came to Joyce, soon after wanting to become Christians. As a result, the village rejected the kids. Joyce however continued her work prayerfully. She began teaching the village children and it wasn’t long before a large group of kids gathered at her place. Eventually the parents also came to observe her teaching. Gradually Joyce was accepted into their society. 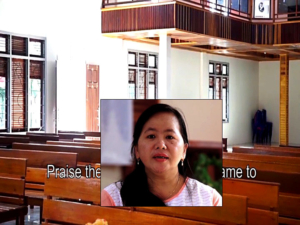 The latest church extension finished on 2017

Since the villagers were transmigrants from other islands, the government built a school for Joyce to teach in. People started becoming Christians and the government donated her a block of land, building a small church on it (6x6m).

Joyce increased her ministry to include the three nearby villages (within 10-20km), helping their inhabitants. Regardless of the heat, rain or darkness, Joyce persistently walked through the jungle to these villages. At times the trip took 8 hours by foot, and she would usually return home after midnight. Nevertheless, the joy of the gospel motivated her to continue.

More people became Christians and the church needed to be extended. As the congregation continued to grow, the church had to be enlarged yet again in 2014 and this third building phase took three years. When finished, the church measured 14x40m and now fits all its more than 200 members.

• Want to support Sumatran pioneers? You can do this at our ’Donate’ page with the reference ’3117 Pioneer support’.