This year we have continued further training of our summer 2019 UPG course participants virtually. Our third meeting of the year was in September, when the pioneers gathered in Dar es Salaam for a video conference.

The teaching of Raili and Mirkku emphasized a child’s value, and that they can come to faith too. Reaching children often opens up new areas.

A strong addition to the conference morning was brought by two mission veterans in children’s ministry, Raili Väisänen and Mirjami Ylenius-Kuosmanen. Their recorded teaching in fluent Swahili was about ‘The Value of a Child’, and ‘Can a Child be Born Again?’ After having heard of this additional part of our program, some pastors had brought their Sunday school teachers along with them. All up there were 48 participants from around Tanzania. Right after the conference, some Sunday school teachers went out reaching children in the Zaramo area and, two Sundays later, the church was full of children! 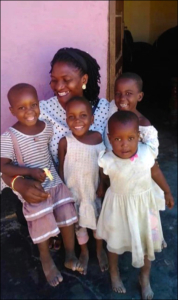 Pastor Jane Mbusa with children from an orphanage

December’s mission trip will be to Mikumi area in the southwest, where a “GNN Team” of ten pioneers will be traveling. Bishop Julius, who oversees some 30 congregations, will host the team’s visit to the Vidunda, Kutu and Masai tribes. Throughout this year similar mission trips have birthed several churches in the area.

In June, a smaller team travelled to Singida, interior Tanzania, where they gathered 30 pastors from the nearby villages to hear teaching on reaching the unreached tribes. Now the pastors of this area are enthusiastically preparing to visit two hostile tribes in a nearby woodland.

During the September outreach, people were healed and giving their lives to Jesus. Through prayer some of them were also released from the bondage of evil spirits. Thus, some Zaramo people from the area have come to faith and started coming to the church.

We praise God that our brothers and sisters in Tanzania are actively ministering amongst the unreached people groups.

When the Corona restrictions closed the churches in Uganda in the spring, we increased our support of the radio ministry to include the broadcasting of Sunday morning church services. Since then, the studio has received phone calls at the end of almost every broadcast. Uncertain times have increased openness towards the message of the gospel, and people are looking for a more solid foundation for their lives. During the pandemic, 25-30 people have been led to follow the Lord on a weekly basis; one week in October even 43. These new believers are directed to churches in the area they live in.

Bishop John Magaba has shared of his gratefulness for such a harvest, for which he cannot take any credit. He also began inviting other church pastors to the broadcasts, and his Pastor wife Nasta and Evangelist son Jordan support him in the radio programs. The churches could re-open again in October, and John continues his ministry with the same joy as before.