For years, GNN has supported Uganda’s Christian Night Radio programs on the RadioHeart broadcasting station. During the early morning hours of every Wednesday, word is spread over the radio to four countries in East Africa. Based on the large number of calls flooding the studio’s phone lines, I have concluded that the given estimation of 1 million active listeners can’t be far off. After all, there are at least 25 million people living within the RadioHeart’s broadcast range!

On February 25th, 2016 the Night Radio’s right-hand man, Innocent, was preaching at a church on the outskirts of Mubende. On his way home, Innocent’s motorcycle was hit by another motorcycle in a busy roundabout.  He flew off the motorcycle and head first onto the pavement. Blood poured out from his mouth, nose and ears…

He was rushed to a health centre and then transferred to a hospital in Kampala, but there was nothing to be done anymore. The faithful evangelist succumbed to his injuries at 6 am the next morning. His wife was left without a husband and their five children without a father. The following Saturday a large group of friends and coworkers accompanied Innocent on his last journey. I will remember Innocent as a cheerful and helpful partner during our missions in Uganda.

Interestingly, Pastor John Magaba, the founder of these night programs, was also in a serious car accident himself a while ago. There’s no doubt that the enemy is unhappy with this fruitful ministry bringing people to Jesus. 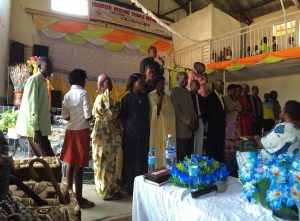 In Radio Conference 2015 we heard testimonies from those who came to faith through the radio programs.

Pastor Aki Miettinen and I will be joining RadioHeart Prayer Conference for the second time on Friday May 20th, starting at 9 o’clock in the evening. The last conference had 500 participants; many of whom were saved through the radio programs. Fervent prayers continued overnight until Saturday morning, and the programs were broadcast live on the air across 4 countries in East Africa.